This article is brought to you by Sebastian, one of Blokada Insiders, and is the first in a series of articles aiming to improve your understanding of ad blocking, privacy and malware protection, and related topics.

In very simple words, how does Blokada work and what is that VPN?

We all know that blocking ads is certainly something we all want. While some developers in fact rely on the revenue coming from displaying ads on their apps, the majority of ads we want to block are annoying, they increase the amount of traffic and simply ruin user experience, to put it straightforward (personal advice: if you use an app whose developers seems to really depend on ad revenue, you can whitelist that app on Blokada, and URL requests from that app won’t be filtered).

There are several solutions to block ads available at the moment, but most of them are somewhat complex on the field of privacy data, others require special measures like rooting your phone, and others block ads on webpages but the rest of the system still displays ads. Nevertheless, Blokada requires none of this measures, and blocks not only webpages but also apps. Let’s see in short terms how Blokada does it.

So, how does Blokada work?

To put it simply, Blokada generates a Virtual Private Network, a VPN, on your phone, and through the use of that VPN it filters traffic against hosts lists that contain hosts that are known as ad hosts. Also, it provides alternate DNS, so eventually that traffic will be resolved with the use of those DNS.

Basically two parts: first through the use a VPN all traffic is checked against a host list that contain ad delivery hosts; the second part is the host list itself, which is automatically updated within Blokada from known hosts list (like AdZHosts). A third component is the alternate DNS option provided by Blokada, but we’re not going to get into it now.

To get things clear, DNS stands for “Domain Name Server” and/or Domain Name System, and while it’s much more complex than these few words, for the purpose of this short article we’re going to say that it is the system by which an URL is converted to an IP address, or, how your phone finally knows which IP is www.google.com. Blokada allows to use other DNS different from the system DNS, but by default the DNS used is the system DNS.

Now, what is a VPN and how does the Blokada VPN affect the privacy of my data?

If there is a match between the URL that a webpage or an app tries to reach and an entry on the host list (the one that contain the ads hosts), then that connection is blocked. If there’s no match, then the data is retrieved from the host and delivered to your phone, be it a webpage or an app. 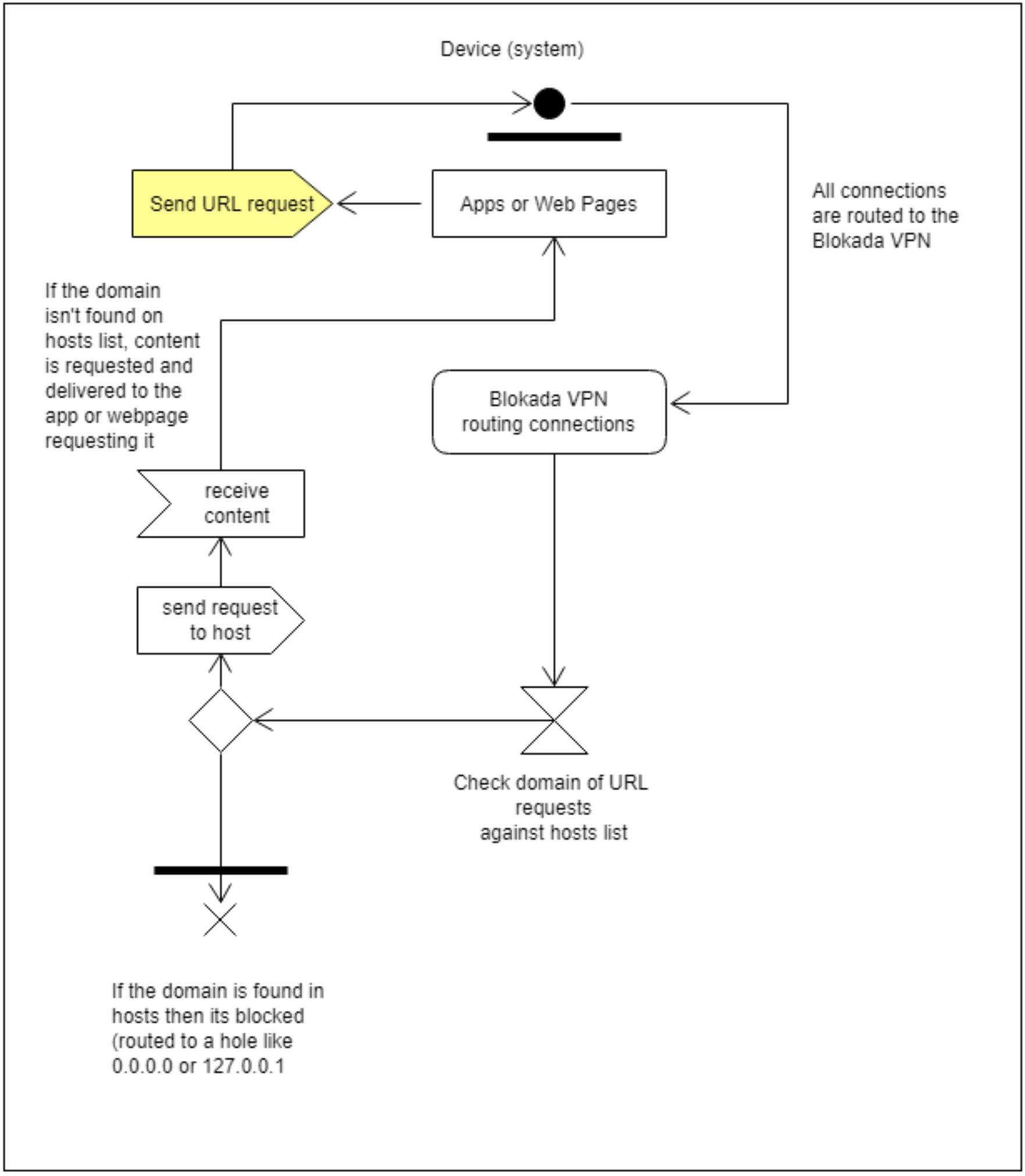 Does the Blokada VPN mean that my data is passing through third party hands?

No. The Blokada VPN is a local VPN and its reason is to route all the traffic through the hosts filters to know when a requested URL matches an ad host. As it was said before, if there’s an URL request to a host on the hosts lists, the request is blocked, so the ad isn’t even reaching the phone (this is where Blokada also helps in saving data, because it blocks the ad from the very request of it, not just displaying it). No data is passing through third party servers or hands or screens nor it is stored anywhere.

So, for the peace of your mind, using Blokada and seeing that VPN android alert doesn’t mean your data is at risk. This method is the reason why Blokada works not only for webpages and inside a specific browser like any other browser extension, but also on any other app on your Android system that requests an URL.

When we are trying to explain in simple words something that has several technical aspects, there always has to be a section with the correct terms, specially for readers with advanced knowledge. In this article we made a few compromises to keep it simple, but there are two important things.